In this exercise, we will convert our initial program ( refer to the first tutorial) to a general purpose program for fetching twitter information of parliaments member of a country. This means we do the first iteration of generalization and refactoring of our code.

Our ambition is to have a program which can analyze Twitter accounts of politicians of any country not only Switzerland. 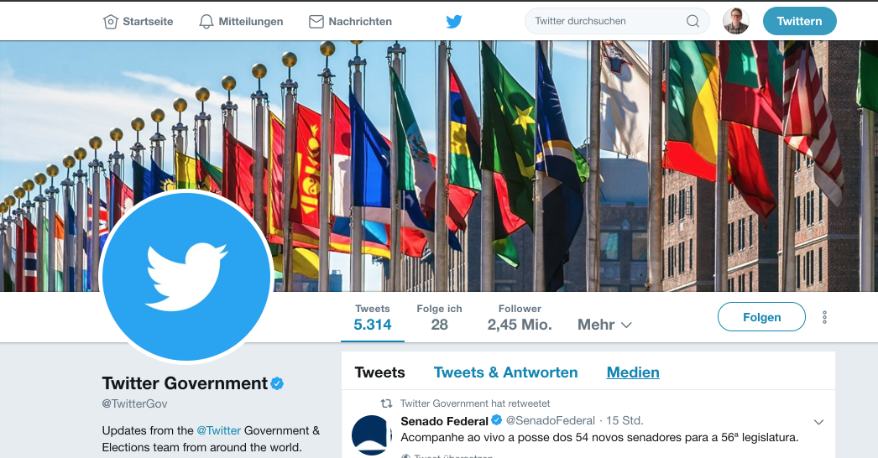 So our program should be generalized in a way that we can use it (i.e., configuring) for other countries as well.

Now what we want to do is to read this information out from a configuration file, similar to what we have done for passing in the Twitter API secrets in the first lesson ( refer to the tutorial)

As you can see in the screenshot below, we name the file config-CH.yaml.

So why to use the CH post-fix? Well the CH postfix is the Alpha-2 code of the international ISO-Country Code standard for Switzerland. Code values (or reference values) are the ingredient of any program to encode information. Best practice is to use standardized one if possible (don’t reinvent the wheel here). I.e., for countries we decided to use Alpha-2 code of the standard ISO 3166-1. As you will see later for encoding languages, we take a similar approach. ISO, by the way, means “ International Organization for Standardization.” 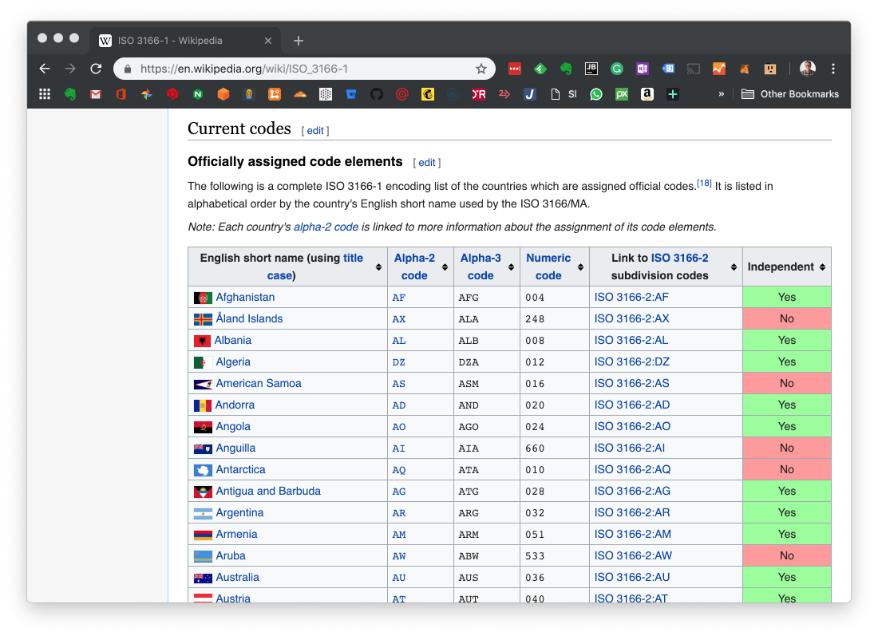 Refactoring and Enhancing
The GovernmentSocialMediaAnalyzer Class

For our generalized program, we do a first refactoring step. Code refactoring is the process of restructuring existing computer code without changing its external behavior. So we rephrase our class in sample1.py to GovernmentSocialMediaAnalyzer and enhance its class constructor init method by a parameter country_code. We took a design decision, that.

Design Decision 1: An instance of our class GovernmentSocialMediaAnalyzer will encapsulate the data and behavior of a dedicated country.

The code enhancements are shown below: 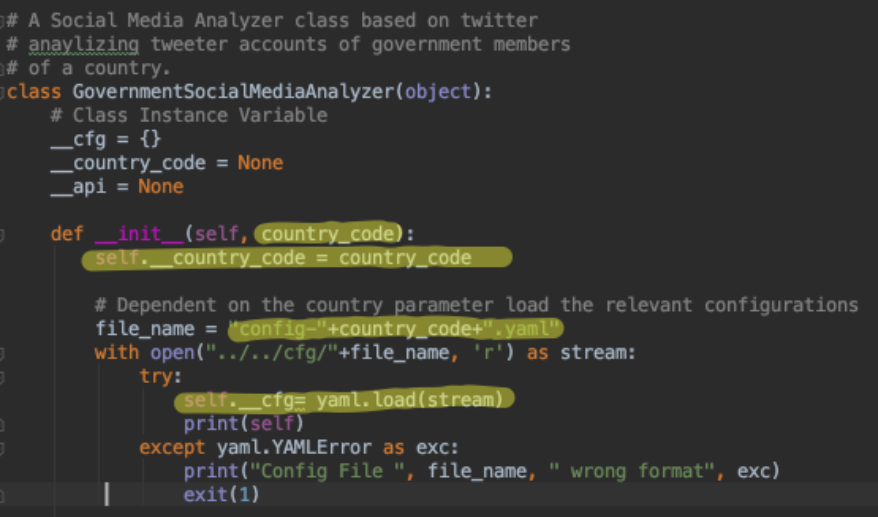 So now we are ready to generalize our get_government_members method by reading the twitter account- and list-name out of the configuration data, which is stored in self.cfg instance variable.

Our program is now ready for any country. I.e. we could use it for any government list of the https://twitter.com/TwitterGov. store the relevant information in a corresponding configuration file, i.e. config-US.yaml (for a US government list) and retrieve the account information.

But le’ts finalize first the refactoring and enhancement of our init class. We take another design decision

Design Decision 2: The init method should encapsulate the loading of all Twitter accounts of the list from Twitter, as well as the conversion to the relevant attributes in attributes column (= array of Strings). The column should be made available as private class instance variables

That means when we create a GovernmentAnalyzer instance for a dedicated country, the initialization phase of the case will include the all the necessary steps to get the data from Twitter into our intern data structures (as represented as columns)

We will do this step in a dedicate helper method, which will be called extract_columns..

The refactored class out of lesson 1 now looks like this. We made the column attributes more descriptive and defined them as class instance variables so that the columns can be used by any method within our class.

So we have finalized and refactored the class instance creation class 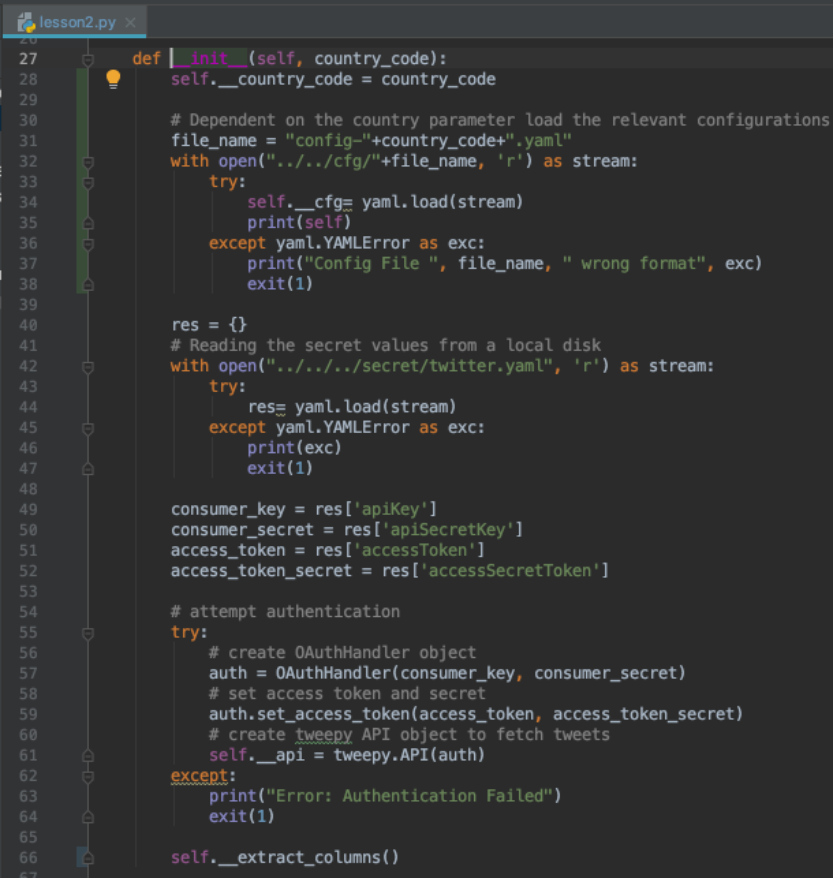 Our check_for_party algorithm of tutorial one was hard coding the party abbreviations in the code itself.

Well, let’s refactor the code and move the party information to our configuration file. Thanks to the flexibility of the YAML file, this can be done quite easily.

Design Decision 3 : We want to use several party abbreviations (potentially in multiple languages) and keywords (e.g. the parties Twitter screen-name) per party to try to identify the party ownership of a politician.

So our configuration config-CH.yaml will require configuration information per party. A list of parties and their abbreviations can be found on parlament.ch in four languages for Switzerland.

In YAML you can easily build up a list of configuration items (e.g. a party configuration item). List members are denoted by a leading hyphen (-) with one member per one to multiple lines, or enclosed in square brackets ([ ]) and separated by comma space(, ).

In our YAML file 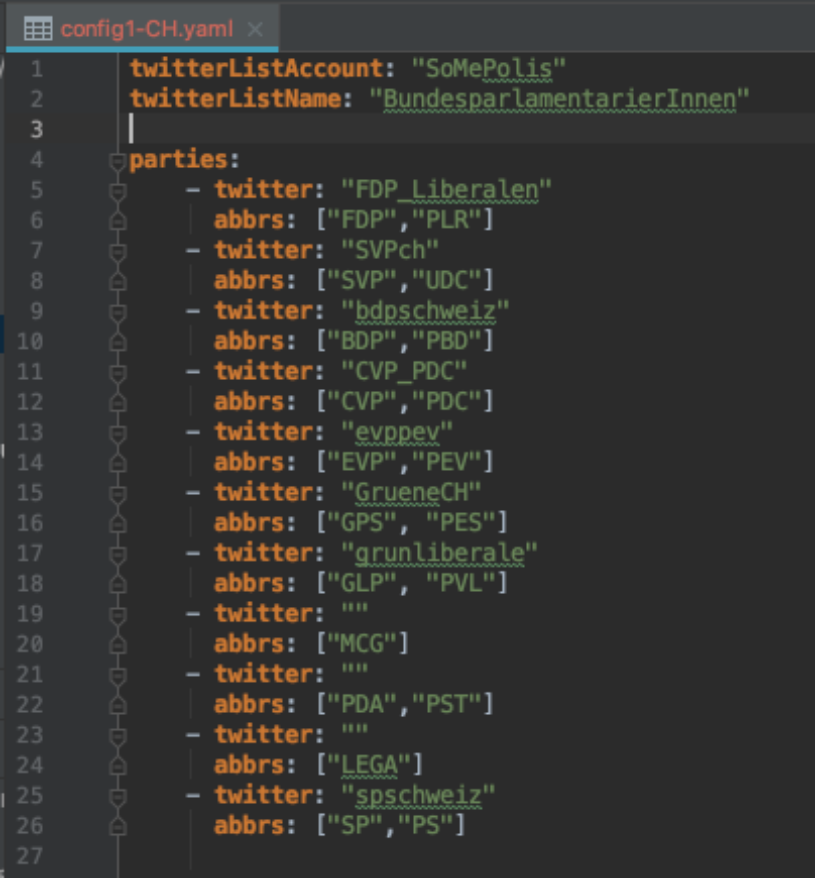 If we check the loaded configuration file (stored in the self.cfg variable) in the Python debugger, it should be clear how the data structure is looking like using Python lists and dictionaries. 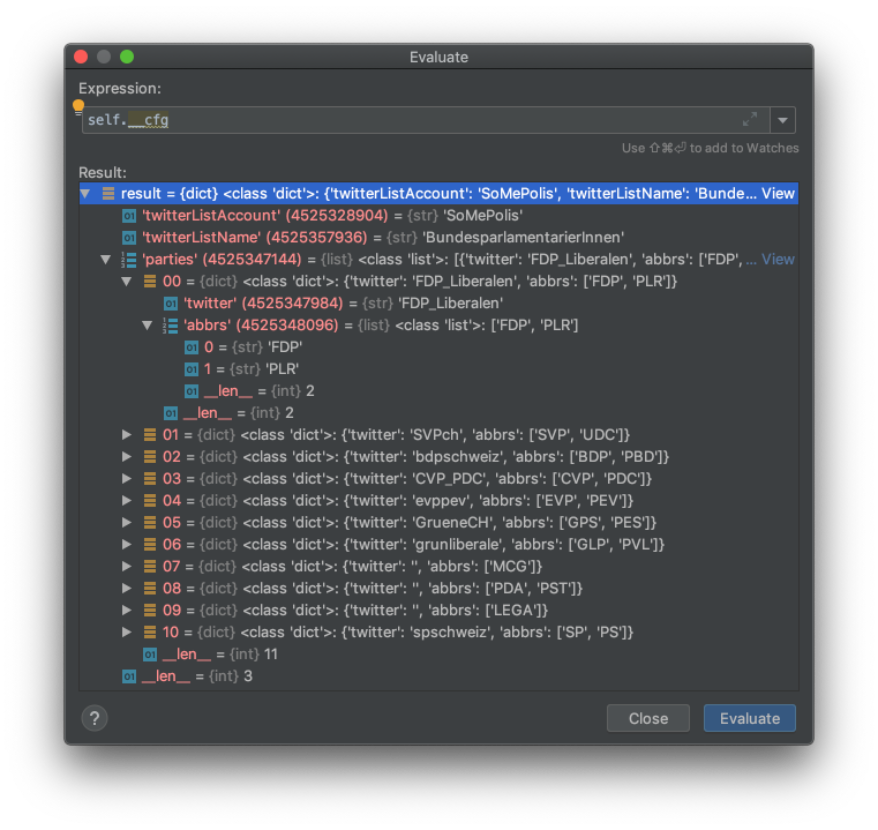 A side-remark to the abbrs attribute, we introduced their a list of party abbreviations, i.e. having multiple national languages means also that a party has multiple abbreviations (e.g. for German and French). In our case above “FDP” and “PLR”. And we want to check for all of them. In other countries, there may be potentially just one abbreviation, but with decision, we are future proof.

Our improved check_for_party method nows look like follows. It will iterate over all twitter accounts and each parties configuration record and checks if the twitter account has a match in its description or screen_name to a party. 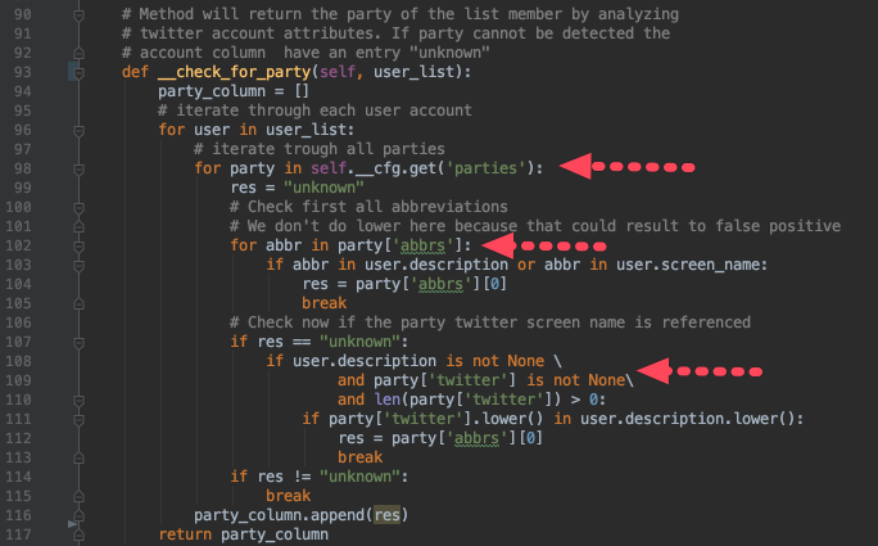 In order to fine tune our algorithm, we have to check its effectiveness on finding a party to twitter account. For that we have to introduce a second table, which will group our twitter accounts according their party allocation.

Obviously the powerful panda package will provide us the necessary tooling. You can refer to the following panda API description with all the details how to group data.

Some comments to the code fragment:

Let’s run the program and check the accuracy of our party assignment allocation algorithm. As a result of the program execution you will now have to tables in your plotly account (also some grid tables will be created, which are not relevant at the moment). 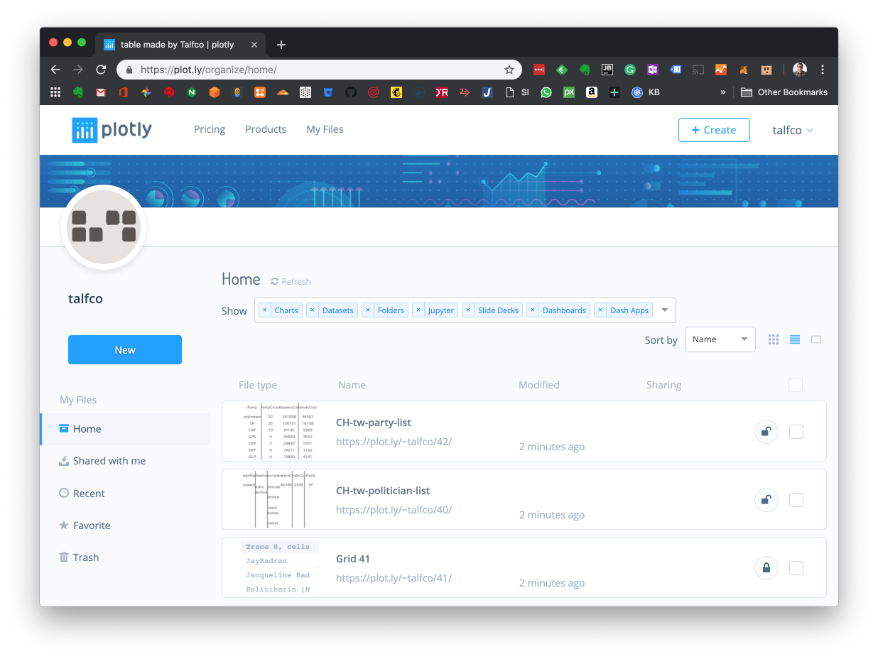 Our first run shows, that the majority of the politician (65) don’t mention their party abbreviations or party twitter screen_name in their account description/screen_name.

So let’s try to fine tune our algorithm. Let’s go through the list once again and check for other keywords which could help us to identify their party relationship.

We found the following key words:

So let’s add this one to our configuration file with a new attribute: keywords. That’s the beauty of YAML you easily can extend with additional attributes. In our case another list attribute. As for example:

And we add the additional check in our check_for_party method 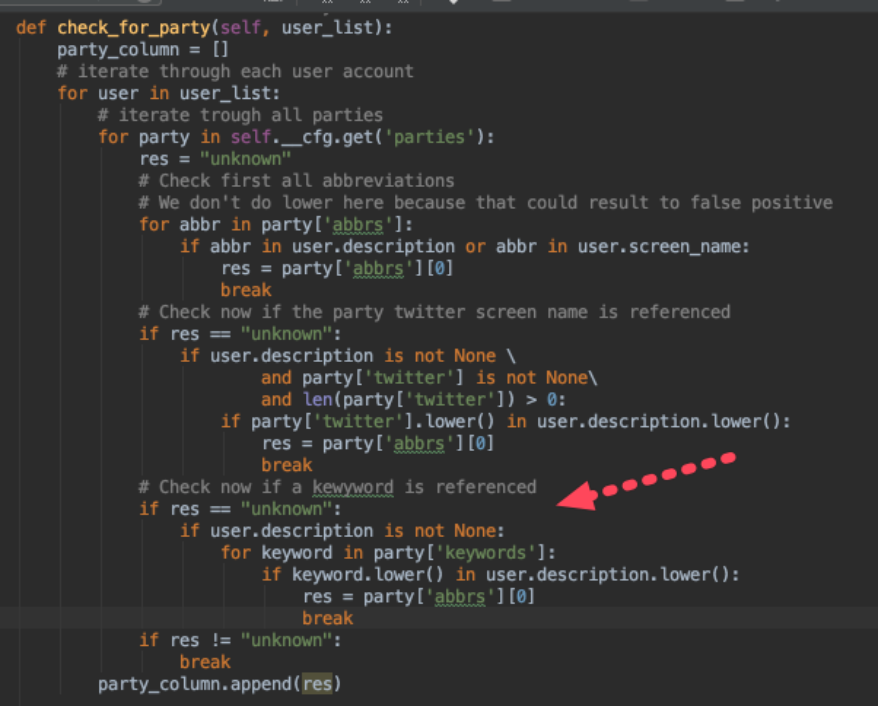 Et voila, we could identify 13 additional twitter accounts with over 20’000 followers. Still, 52 accounts can’t be mapped to a party, but for that, we have to connect another data source, which will be done in a later tutorial.

As a final step for today, we refactor the create_politican_table method. Mainly we standardize the file name used in plotly by using the country code in the file name. That allows us to generate tables for different countries and ensuring that they are not overwriting each other in our plotly account.

There we are, we have now generalized and refactored our overall application and have good foundation backed by a configuration file for a further build out.

We can now instantiate a GovernmnetSocialMediaAnalyzer for a dedicated country (supposing that we have provided the necessary configuration file) and extract twitter relevant data into a plotly table for further processing.

As a UML Sequence Diagram visualized, the interaction flow of our class can be represented as follows: 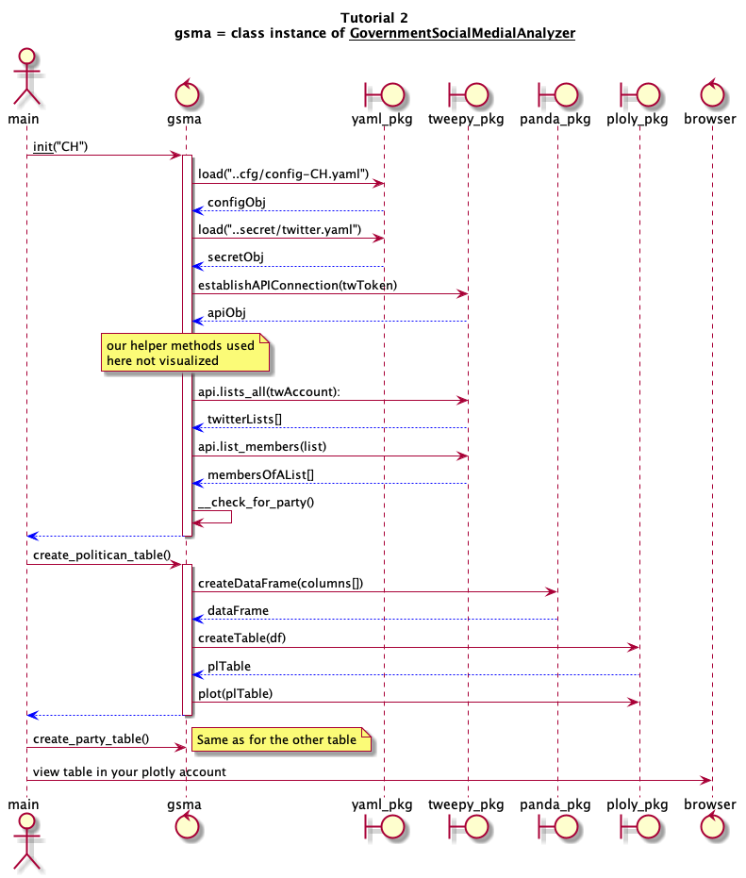 If you want to understand more details about UML sequence diagrams, refer to the following tutorial. It’s an excellent technique to visualize various aspects of a program. In the above diagram, the return calls of a message are depicted in blue.

As an example: The message line to the panda package to create a data frame is depicted in red ( createDataFrame), its return message line of a dataFrame object in blue.

The source code can be found here: https://github.com/talfco/clb-sentiment

This blog entry was fully produced within Evernote and published using the Cloudburo Publishing Bot .