Nevertheless quite some configuration is still required, which should be standardized in order to allow to automate these steps. One aspect to consider is the Security configuration of your EB instances which are steering the mircoservices.

Standardize the necessary roles and policies from the beginning (amongst other by using a naming scheme) which will help you during the automation of the tasks.

It’s important that you understand the major concepts in context of the AWS Identity and Access Management (IAM capability):


An EB environment requires two IAM roles for correct functioning. These are

A Service Role grants the EB instance access to use other AWS services on your behalf.

We create a policy which is globally defined and can be integrated in any microservice EB environment.
Having done that we create now a Service Role. We decide here to define a role on a microservice level to be flexible for the future. 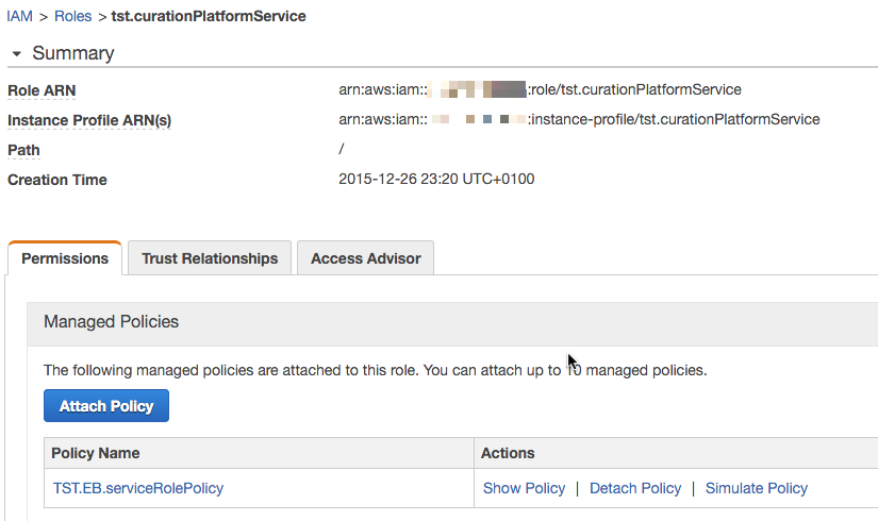 We create policy which is which is globally defined and can be integrated in any microservice EB environment.
Having done that we create now a Instance Profile Role. We decide here to define a role on a microservice level to be flexible for the future.

So now we have defined two roles with the necessary policies, which must be configured to our EB environment template which is used as a configuration for each EB instance.

Each instance created by EB will have this IAM roles allocated and obviously your IAM Roles will have multiple policies attached dependent on your microservice integration into the AWS ecosystem.

Allocate the two roles to your EB environment configuration


The Instance Profile Role will be allocated in the EB Dashboard as part of the “Instances” tab.

The Service Role will be allocated in the EB Dashboard as part of the “Health” tab.

In case you are automating the environment creation process with the help of the AWS Command Line Interface (CLI) you should include the following option settings, which are passed as part of the --option-settings parameter

Again an Encryption Key is provided per region, where the EB instance will run.

From a naming point of view we will not code the region postfix, due to the fact that you can define the same encryption key on a per region level.

So we will call our key tst_ms_<microserviceName>.

As a key user(s) we assign the role of tst.curationPlatform, i.e. our Elastic Beanstalk Microservice will be able to encrypt and decrypt sensitive data at rest (= in our S3 buckets).

In order to enable remote login into your Elastic Beanstalk Environment you have to create a EC2 key pair and configure it into your EB configuration.

You can find the description Docker Small Hints #3: SSH into your AWS Elastic Beanstalk Component