In this tutorial, we do mainly two steps

As you already know we are interested in a generalized program, which can work with multiple countries. For that, we will introduce an abstract class and the factory pattern in the second part of our tutorial.

But let’s start with the first quite easy task of generating two charts for our tables.

Plotly Chart Generation
We create a bar chart as well as a pie chart. As a base, we take our plotly table CH-tw-party-list.

The code is straightforward:

As one can see in the code excerpt, various configuration parameters allow you to modify the layout of a chart. Head over to the Plotly Python Open Source Graphing Library to find out more about the various possibilities with charts, panda and plotly. 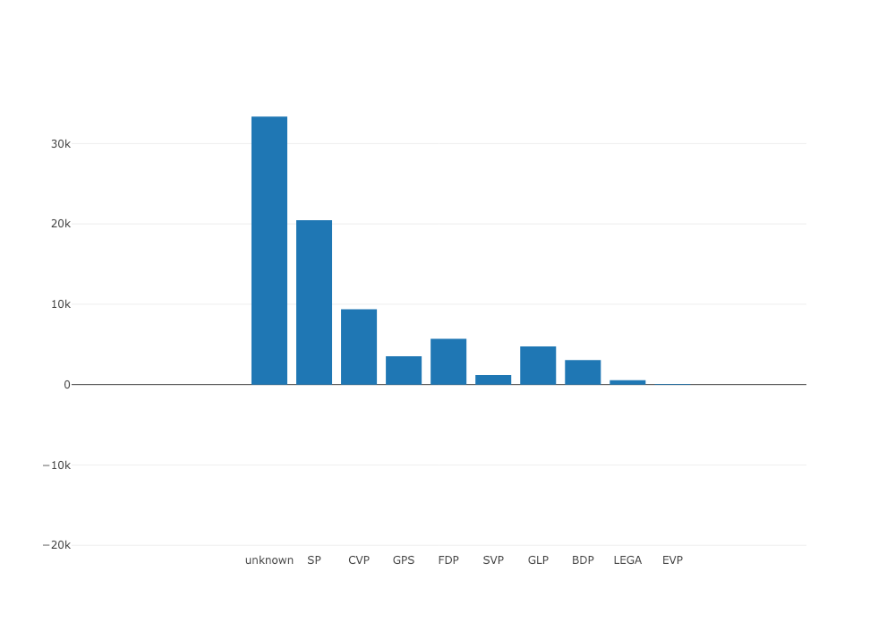 As one can see we have a lot of “unkowns”, i.e. we couldn’t identify the corresponding party by just analyzing Twitter data elements. In the second part of this tutorial, we will connect another data source for addressing this issue. 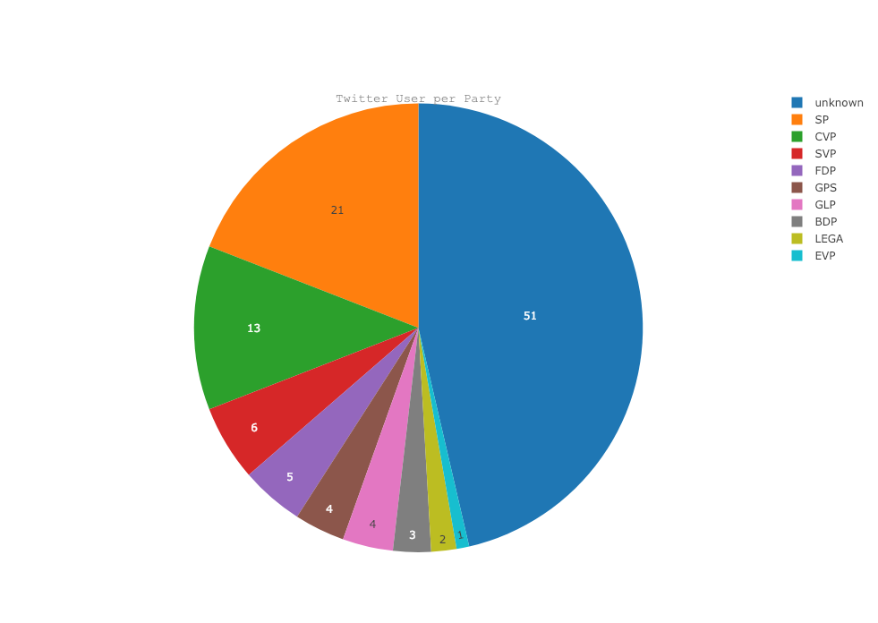 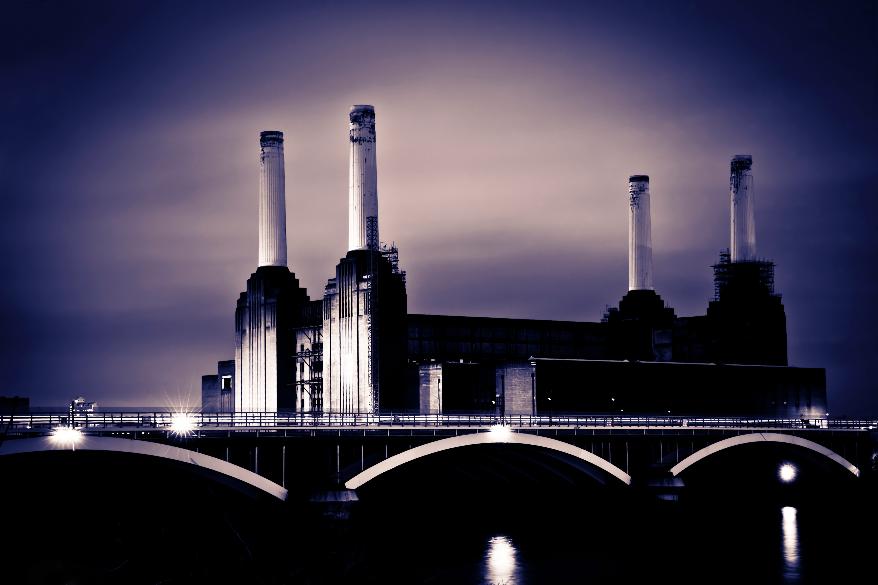 Photo by Rodney Minter-Brown on Unsplash

In the recent years, the availability of so-called open Government API’s exploded. It stems from the idea that data should be open, as Wikipedia describes the term of Open Data:

“Open data is the idea that some data should be freely available to everyone to use and republish as they wish, without restrictions from copyright, patents or other mechanisms of control….
One of the most important forms of open data is open government data (OGD), which is a form of open data created by ruling government institutions. Open government data’s importance is borne from it being a part of citizens' everyday lives, down to the most routine/mundane tasks that are seemingly far removed from government.”

A good starting point f for getting an overview of government data API’s is the programmablweb directory, which list over 20’00 different API’s.

The government API category can be found here:

The data API of the US government: https://www.data.gov/developers/apis 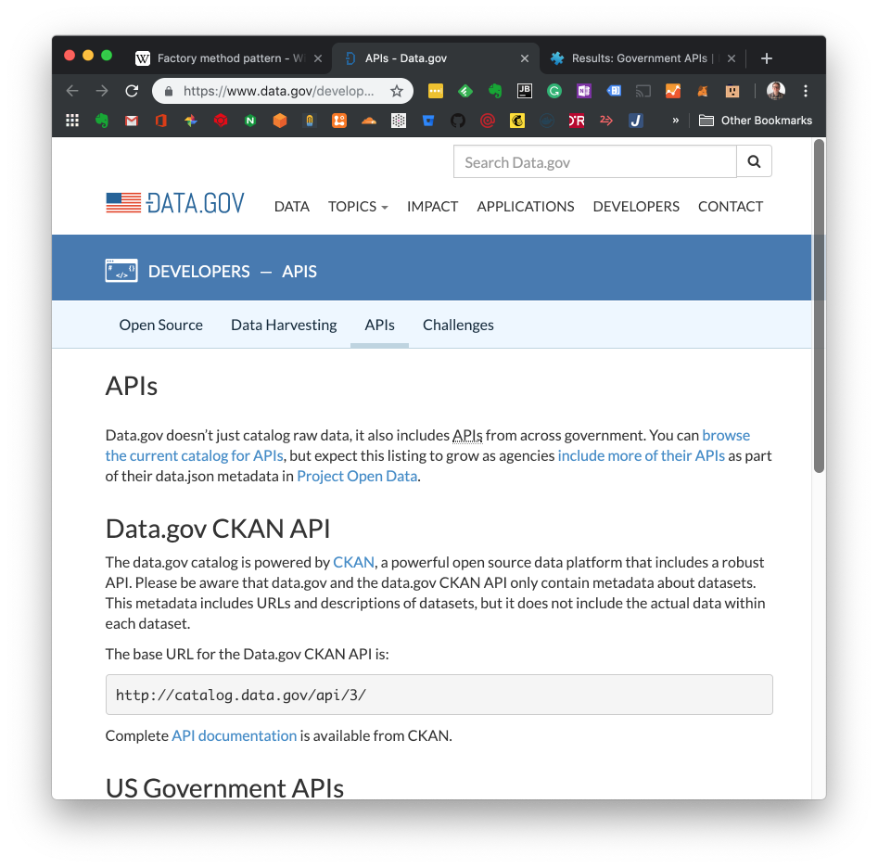 Or the Swiss Government API of the Swiss Parliament: http://ws-old.parlament.ch/: 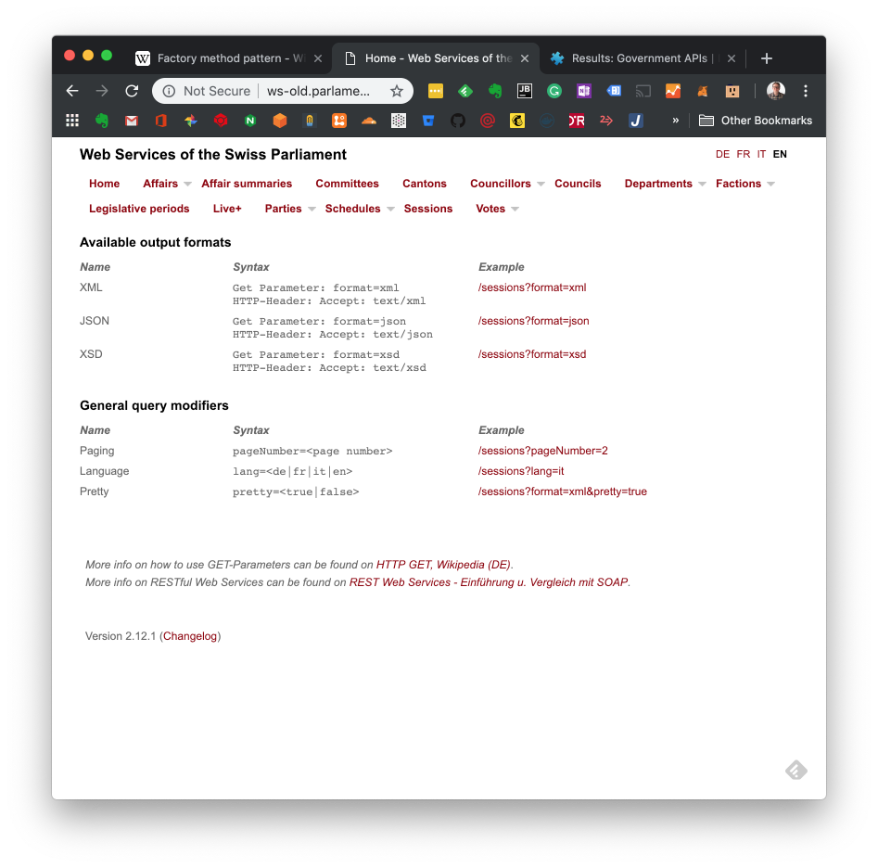 We will use the Swiss Parliament API’s to extract personal data of the parliament members (mainly the Party allocation) in order to increase the accuracy of our twitter matching algorithm.

What we require is the councillors data objects: http://ws-old.parlament.ch/councillors 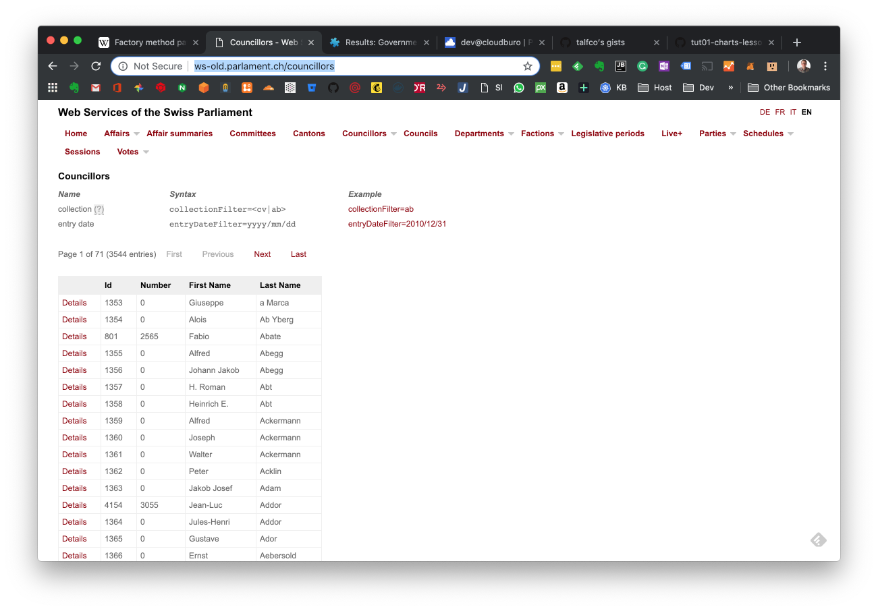 In order to get the data in a program readable form we have to attach the query parameter: format=json. Which will return the content as a JSON document: http://ws-old.parlament.ch/councillors?format=json

As we have already explained in our second tutorial a public API may return a lot of information. In order to control the amount of data returned in one request, the concept of a cursor or paging mechanism is used.

The Swiss Parliament API returns about 25 records in one request. The latest request record will have an attribute attached which tells you if there are more data available ( hasMorePages=true).

In case it sets to ‘ true’ you may fetch the next page by adding the query parameter
pageNumber=2 etc. 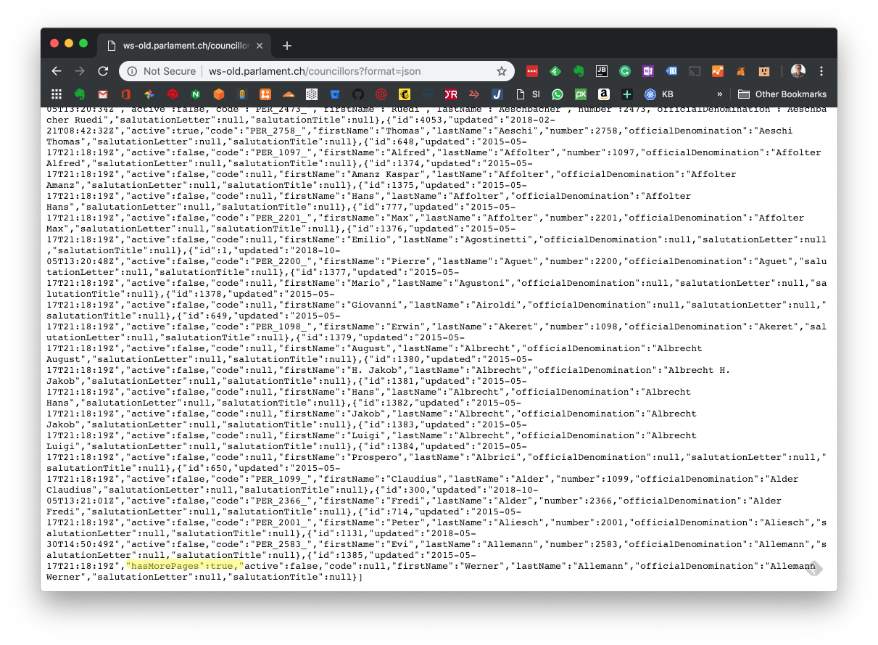 You will find such kind of information about the API normally in its user documentation, e.g. the Swiss Parliament API has some parameters to control the output format, language etc.

Having now a basic understanding of the API, we can enhance program which is capable of reading data from country-specific government API’s. Let’s dig into the code.

Enhancing the Code - the UML Diagram

Introducing the government API in a general way needs some serious design and enhancement of our program. The UML class diagram of our enhanced program looks as follows (don’t be overwhelmed by the complexity, all the details will be explained later in this article). 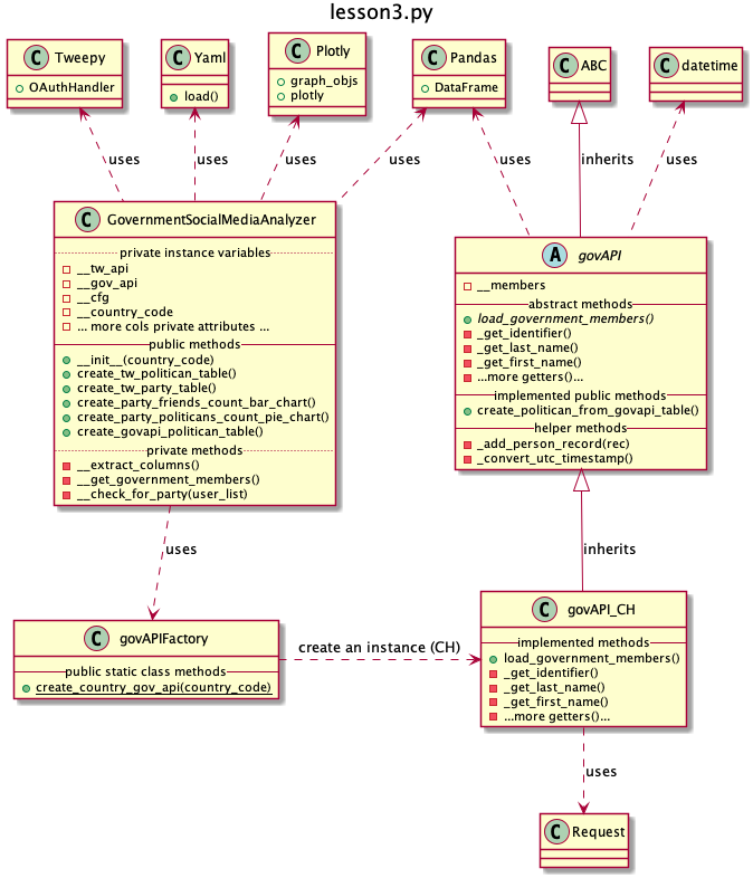 A quick summary of what we have done until now:


Now we will introduce three new classes govAPIFactory, govAPI (an abstract class) and govAPI_CH, which will build a generalized approach for connecting any kind of government API’s.

Software DesignPattern play an important role in Software design, as described by Wikipedia:

“In software engineering, a software design pattern is a general, reusable solution to a commonly occurring problem within a given context in software design. It is not a finished design that can be transformed directly into source or machine code. It is a description or template for how to solve a problem that can be used in many different situations. Design patterns are formalized best practices that the programmer can use to solve common problems when designing an application or system.”

In our design, we will use the Factory Method Pattern to generalise the connectivity to a government API, which is explained by Wikipedia as follows:

“In class-based programming, the factory method pattern is a creational pattern that uses factory methods to deal with the problem of creating objects without having to specify the exact class of the object that will be created. This is done by creating objects by calling a factory method—either specified in an interface and implemented by child classes, or implemented in a base class and optionally overridden by derived classes —rather than by calling a constructor.”

Our design will be based on the strategy, to define 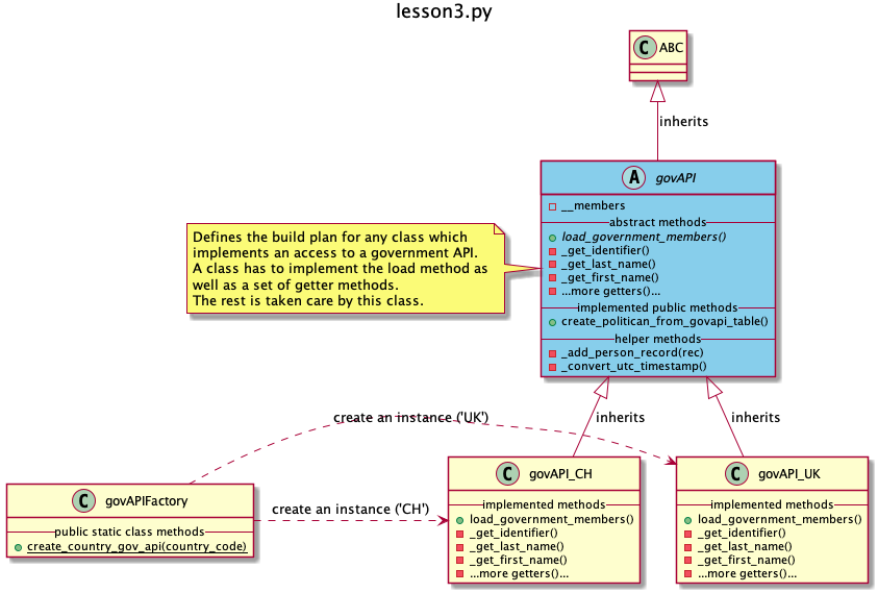 In Python, an abstract class is derived (or inherited) from the class ABC and will have one to more methods marked with @abstractmethod.


So the abstract class provides you with a build plan, for any implementation class which inherits from it. in our class the govAPI_CH. What kind of methods does govAPI_CH has to implement ?

First of all the implementation of the load_government_members() method has to take care of the politician’s data records fetching from the government API. Each fetched record - which represents the data of a single politician - must be passed to the method add_person_record (which is already implemented by the govAPI base class)

The question now is, what the heck is the add_person_record method doing ? Well look at the code below.

The method is just preparing a target dictionary for our person record. I.e. the attribute names defined ( lastName, firstName, council etc.) are the names we want to use for any GovAPI implementation.

That means our retrieved record in the form of a dedicated government API implementation (i.e. in the form of the Swiss Government Parliament API) has to be transformed by using a bunch of getter methods.

Each of this getter methods is either abstract or returns an empty string. It’s the responsibility of the implementer of an inherited class ( GovAPI_CH) to provide the correct getter implementation.

The getter method implementations of GovAPI_CH is shown below. It consists of a bunch of getter methods, which will return required attribute values out of the record.
Github: https://gist.github.com/talfco/dd482ff73c8e35baacf15ffb63852638

Let’s drill down into the method load_gevernment_members:

Our implementation uses the python module requests which is “an elegant and simple HTTP library for human-beings”. In the introduction section of this article, we provided an overview of the Swiss parliaments API. The code below will fetch the data, using the paging mechanism.

The URL and its parameter we placed in our configuration YAML file.


The above method will be called within the govAPI function create_politican_from_govapi_table (already implmented by the govAPI parent class) which will transform the list of politician records into a Panda dataframe.


It’s important to realize here, that the structure of this Panda dataframe will be the same of any kind of Government API, as long as we implement a specific class based on the govAPI abstract class. So we normalized our data so that we can work and process it afterward in a standardized way.

Again we strived an important design pattern, our target structure (or model), is known under the name Canonical Model. As Wikipedia describes:

"A canonical model is a design pattern used to communicate between different data formats. Essentially: create a data model which is a superset of all the others ("canonical”), and create a “translator” module or layer to/from which all existing modules exchange data with other modules.”

Conceptually we have built a mini-data pipeline. For each government API we have to implement a data record fetching function and transformation rules (the getters) which will transform the data to our standardised one. 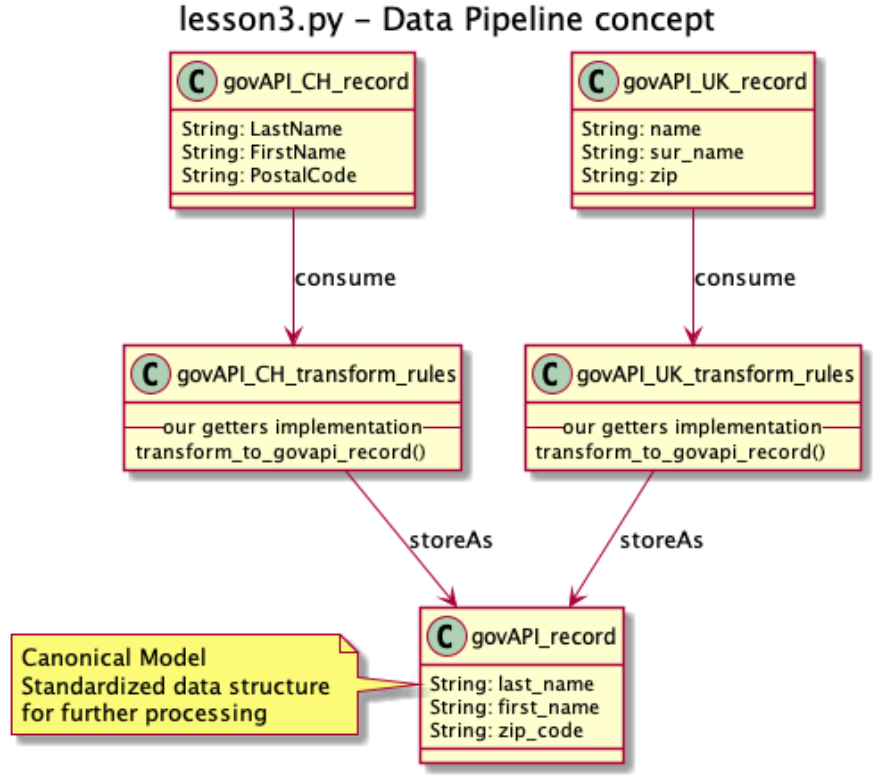 The whole pattern visualized in a UML sequence diagram. 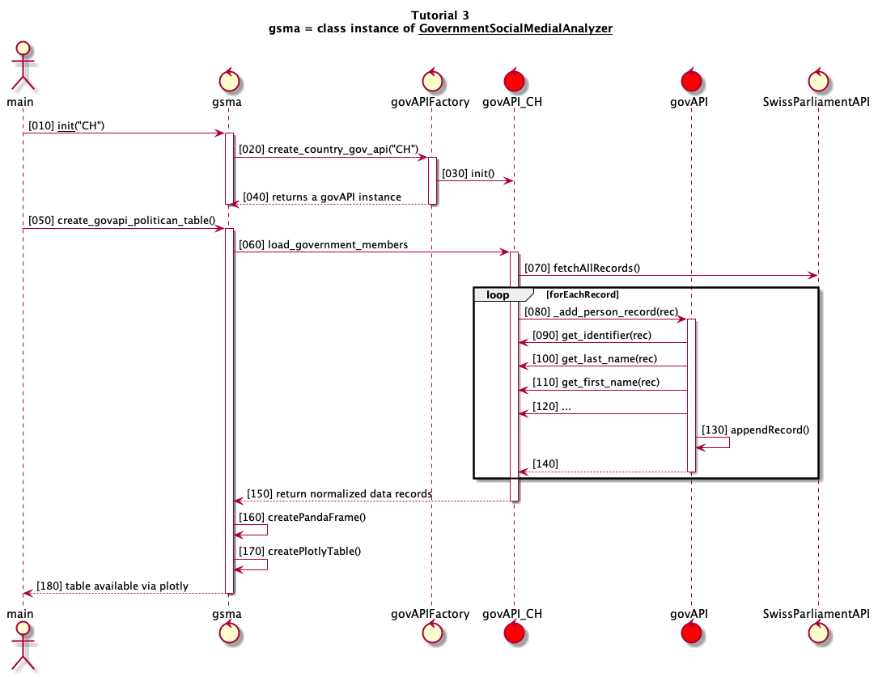 It’s important that you understand the responsibility of the various classes. govAPI and govAPI_CH (red dots) are visible to the outside world ( govAPIFactory, gsma) as one class instance. For the caller is irrelevant who is implementing which method.

One final thing is missing, the govAPIFactory class, which is quite straightforward. Depending on the country_code a corresponding implementation class instance will be created and returned to the caller:


Uff, that was quite some content to be absorbed, we introduced two important design pattern the factory method and canonical data model, as well have shown how to generate a first pair of charts.

The lesson3.py program will generate the table within Plotly under the name CH-govapi-member-list. 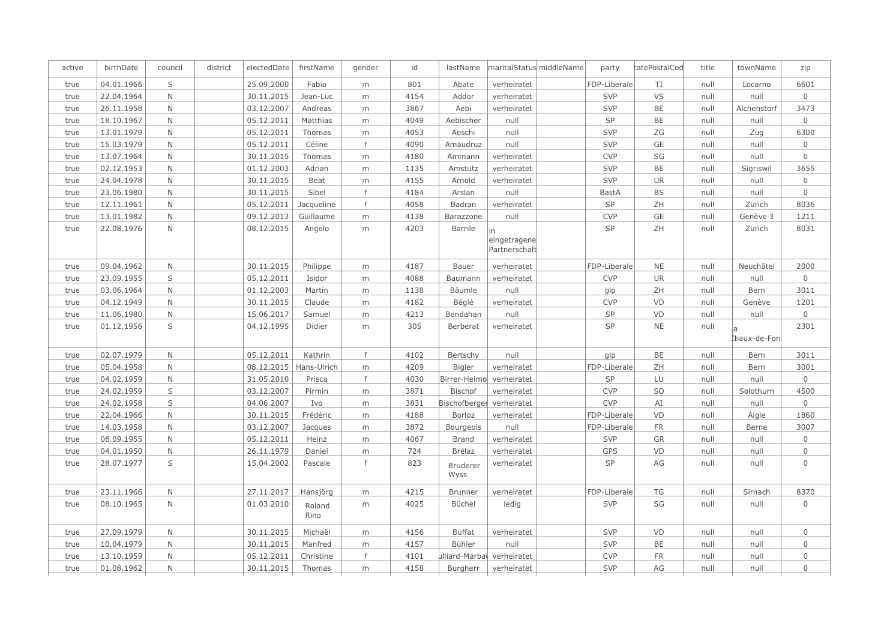 You can find the exercise here: Link

The source code can be found here (lesson 3 directory): https://github.com/talfco/clb-sentiment