Below you will find the API Documentation.

The installed request handler will expose a well-defined API to the consumers of the application for transferring and manipulating data of the exposed business domain objects (BDO).

There are minor differences in the two implementation which will be listed in the documentation.

REST API which is supporting the JSON format via the HTTP protocol.

All URLs referenced have the following format:

The model loader will create for each defined a model a subresource which will be make up the next level of the overall URL.

The following GET operations are supported

For example the above defined moongoose customers collection URL would look like: 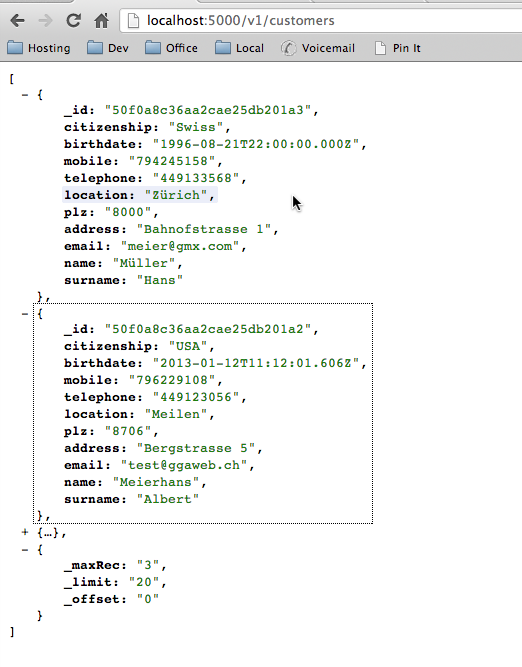 The current implementation will return partial response only limiting to 20 records, which can be paged through. This limit will be made configurable in an upcoming release.

I support to styles of pagination

By default the last JSON record entry will contain additional technical and meta information about the request, necessary for allowing consumers to implement a paging.

Use offset to skip a number of records, as for example with a limit of 20, you would send a first request with offset=0 then offset=20, then offset=40 etc. until you reached _maxRec.

By passing in a maxRec parameter (normally the one gotten by an earlier paging requerst), the request handler will by pass the database count objects statement, which results in one db activity less (performance optimization). The passed in number will passed back via _maxRec entry. Normally a consumer will fetch in the first request the _maxRec number and pass it back for the subsequent request, resulting in a faster data access request.

Use limitthe restrict the number of records returned. The number must be less than the maximal limit number allowed (currently 20).

In the Google AppEngine Backend counting of objects is always inefficient and therefore the cursor style paging is supported. The returend opaque identifier has to be provided as additional query parameter for the subsequent call

This allows you to page to arbitrary large collections.

Allows you to return only a partial response by listing the fields you are interested in. By default the _id field will be always included. 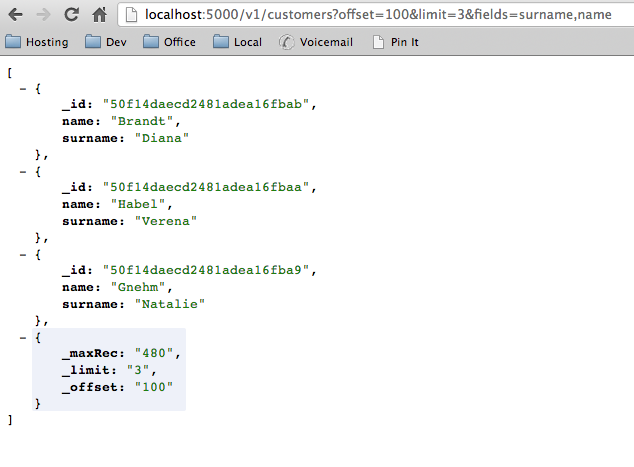 With the following conventions:

Will return the object with the corresponding id.

In case the object doesn’t exist an empty response will be returned.

Applies according to the definition as described above in the get list of objects.

Returning a set of dedicated objects

Will return the object with the corresponding id.

Applies according to the definition as described above in the get list of objects.

Changes the attributes of the object associated with the corresponding id. As a reply the updated object will be passed back as a JSON record.

Will delete the corresponding object. As a succesful result the status code 200 will be returned.

Will be returned for a succesful action (e.g. new object creation)

Will be returned in case the request sent by the consumer was not correct (e.g. wrong parameters)

The resource was not found. There is nothing on that endpoint URI. The returned JSON is empty.

Will be returned in case there is a error in the technical server infrastructure.

In case of an error the following JSON Error structure will be given back together with above defined HTTP Status code.

Any date and timestamp returned by the REST API Layer will follow the rule of the ISO8601 standard. It will be of the following format: